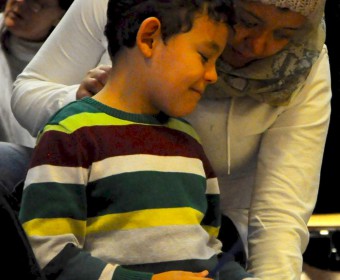 DIE BUCHPATEN have successfully commenced the new year with a new set of participation readings! Our second reading was held on Monday, January the 11th, in the auditorium of the primary school Opfikon. Invited were two kindergarten groups who instantly made themselves noticed as soon as they entered the room. Almost forty children jumping onto the stage, a stage setting of vibrant, darting colours! 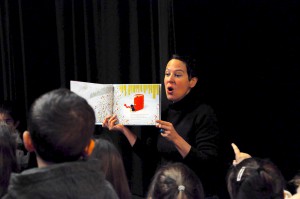 But once the bell had rung, the room went still. Still as mice, the children sat in front of Kristina Lemke, the storyteller of DIE BUCHPATEN. Spellbound, they kneeled very closely together on stage. A couple of children kept on scooting forward while the story “Snowbears never lie” progressed. But the silence was already over on the second page: Audible surprise went through the room when the children heard about giant snow bear living in the even larger fridge in the picture. “How could he possibly fit in there?”, a boy wanted to know. Another asked: “What was he even doing in there?” Kristina smiled at the children thirsting for knowledge, and patiently answered all questions before continuing with the story. After all, having the children actively participation is what these readings are all about. And how active they were! 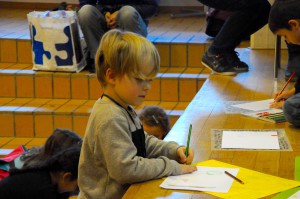 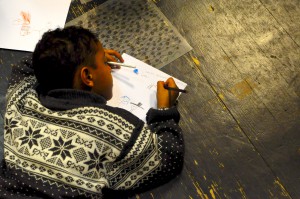 Once the story ended, the children began to draw the most suspenseful moment from the adventure with the snow bear. They now lay or kneeled crisscross in the auditorium, concentrated on their colouring. On stage, next to the stage. In pairs, in threes or simply alone, completely absorbed in the task of creating their pictures. When one girl succeeded in drawing an especially pretty picture, she picked it up and ran to her mother, who, infected by her daughters passion, immediately began to draw, too. The rest of the parents found themselves also on the ground next to all the children sooner or later. Compliments such as “Wow, that is so pretty!” oder “Your snow bear is very big!” were heard from all sides. 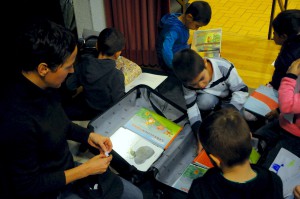 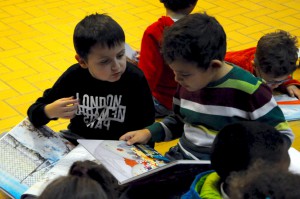 One child after the other finally lined up to pick out a picture book that it could take home, and show Kristina its piece of art. It was no surprise: Most pictures resembled that of one boy’s, whose whole family stood in the snow with the snow bear wearing his red scarf standing between the boy’s mother and father. One could really tell that the story left a mark on the children.