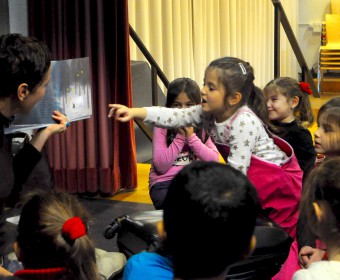 We from DIE BUCHPATEN enjoy telling about all the great things that happen in our participation readings. How fulfilling it is having thirty or more children under the spell of our storytelling, to look at their pictures and to realize what a deep impression the story has left behind. These experiences give us the motivation to go back an organise even more readings every time. But what is it exactly that we do during participation readings? Do we read? Of course! But what does that mean?

Storytellers who guide our participation readings are all invariably schooled in dialogic reading. Dialogic reading is a technique of storytelling used to encourage a child to actively participate in the evolution of a story. That way, a steeper learn curve is achieved in the child’s oral and reading fluency. From the beginning, dialogic reading is much more varied than traditional storytelling. Usually, a storyteller would begin with a phrase like: “I’m now going to tell you a story about…” If the story sounds interesting, a child will listen, if not, the child usually just passively sits there and waits for it all to end. But that is not what we want! A story, after all, will only become really alive through the imagination of a child. To get a hold of that imagination, one could instead start off like Kristina Lemke during a reading of “Snowbears never lie”: “Have you kids ever lied? No? Well, I’ve lied before!” The child, because it has been asked a question, now takes an active role in adorning the story. It wants to know what’s up with all the lying!

Through the rest of the story, the storyteller poses more and more questions concerning what has been seen and heard. For example, once little Marie finds the huge refrigerator in the middle of the woods: “What, do you think, could possibly be in such a big fridge?” The child starts to realise that it is taken seriously and that its inputs are explicitly requested. The more it answers and comments, the less a storyteller will speak. The child ends up becoming the narrator of the story. Finally, the storyteller will only limit him- or herself to add to or reformulate the child’s comments. This kind of repetition of the child’s statements gives it new vocabulary and sentence structures to work with, that the child then can use and consolidate in later inputs.

The reference to the child’s life also plays an important role. The storyteller could say: “Do you see how little Marie’s flying? Have you ever flown? Where to? And how was it?” That way, a connections is established between the story and the real world. The picture books gain in significance, becoming more than mere entertainment. They now are an assistance in the child’s reflection process.

It is impressive how communicative a child, that usually hardly speaks up, just by applying the dialogic reading technique. Even more impressive is the progress that sets in after only one or two participation readings. The child becomes more self-confident and fluent in the use of a (often secondary) language, and, noticing this, the child urges more and more to convey its opinions. And once it cannot stop talking passionately about the story, that is when DIE BUCHPATEN have definitely reached their goal.