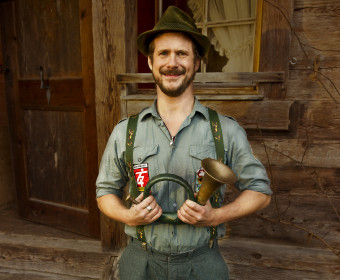 You have got children but still want to go to a concert? No problem! Don’t spend the money on a babysitter and just take them with you to a concert by “Marius und die Jagdkapelle”. Marius Tschirky and his band are old school rockers, and it doesn’t take long before the whole venue is raving. The concerts are actually for children but that doesn’t matter because no person with a little flair for music could not love their sound. My son was three years old when he discovered the “Jagdkapelle” (engl. hunting band). My son wouldn’t leave the house anymore without red hiking socks, the trademark of Marius and his guitar – except maybe to concerts of said band. Marius doesn’t only know his audience as a musician, he is also a kindergarten teacher and a nature pedagogue. Together with his wife Gina Tschirky, he founded “Sonnwendlig”, a forest playgroup in the Appenzeller region. There, the huntsman wanders with the children through the woods regardless of seasons. He learnt early on what is good for children: as little occupational therapy as possible and lots of music and nature instead. And, of course, very important: good stories! Marius is a great songwriter and storyteller, with great humour and depth in his words. We are very glad to have convinced Marius of our cause and him supporting us. Thanks a lot, dear Marius and Tally Ho!